Early Trauma Recovery > Uncategorized > “I am the worstest girl!” 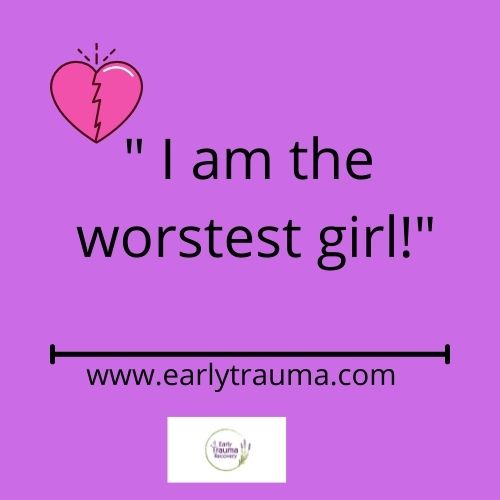 “I am the worstest girl!”

Sally hurriedly pushed the cart up the grocery isle. Susan sat contentedly in the seat, tapped mom’s hand and looked around. Jane lagged behind, curiously examining the stacked cans and colorful boxes. Sally turned and said to her foster daughter, “Jane, stop touching those things. Come on, keep up. We have a lot to do today.” After turning around and moving forward, Sally realized Jane was not present. Sally looked around and called for Jane in a sharp tone, “Come here right now.” At this second call from her mom, Jane rushed towards her, knocking over several soup cans with a loud bang.  Jane froze and looked at the spilled cans that surrounded her. With an exasperated huff, Sally turned, stomped to Jane, and began picking up the cans. She angrily placed the cans back on the shelf and asked, “Why cannot you just listen to me? You could have broken something. You have to be more like Susan!” With the shelves straighten, Sally roughly led Jane to the cart. Walking on, Sally maintained a litany of everything that needed to be done and how Jane was interfering. As the family exited the store, four-year-old Jane looked dejectedly at her mom and said, “I am the worsetest girl.”

Unintentionally, Sally conveyed to her little daughter that she was a bad girl when she was curious, lagged behind, knocked the cans over, and did not hurry along with mom. Jane’s take away message was she was bad—look how many times her mom yelled at her in the store and her sister was good for not being yelled at. These occurrences can be found daily in the community and in the home. Parents demanding children stop this or that, yelling, even demeaning their children (“why did you do that, don’t you have a brain?”). while parents need to correct their children, set limits and boundaries, and give consequences, the cost may be to their child’s sense of self. “The way we talk to our children become their inner voice.” (Peggy O’Mara) Jane’s inner voice was, “I am the worsestest.”

What went wrong between Jane and her mom?

How do we fix it?

Let’s be proactive and explore ways to for parents to encourage compliance without internalizing “she is the worsetest.”

Because taking children to the store is a universal experience in our world, we highly recommend the “practice trip” as a technique. It is very surprising to us that more parents do not use this intentionally. The practice trip(s) do not contain the need to 1. Acquire particular items now. 2. Have a strict time limit. How one explains the trip allows the parent to set and work on specific goals.

For example, a trip to improve developmental skills may include goals of:

Sally’s arrangement of the practice trip may sound like this:

“Jane, we have time this morning for a practice trip to the grocery store with ice cream at the end. We are going to work on getting through the store quickly, buying a few items, and you being able to stay with me throughout the store. If we are successful, we will go to Dairy Queen at the end.”

Sally gave Jane a timer, explained the rule is they will walk up and down each isle. Within 15 minutes, they will buy bread, milk, eggs, butter, and flour, and will leave.

Sally has the choice to leave at the 15 minute mark even if they were unable to purchase the items or if Jane did not stay with her. Sally could also reset the timer and try again.

Consequences are not necessary as this is a teaching activity. The reward is optional if the trip was unsuccessful in achieving the goals. You may consider other ways to celebrate unsuccessful trips for any compliance. Make sure the family reflections on what worked and what did not work.

In contrast, a practice session to address the Negative Internal Working Model may include goals:

Sally’s arrangement of the practice trip may sound like this:

“Jane, we have time this morning for a practice trip to the grocery store. We will take a few minutes to walk through the store. I will buy a few items and you will have to fight that part of you that does not trust me. I will know when you are trusting me because you will hold my hand or stay by my side. Our last isle will be the cereal section and if you are winning your battle, you will have 10 minutes to pick any kind you want. You know that hurt part may fight you so bad that you won’t be able to stay with me, or you may complain, even, finding the cereal you like within the time may be hard. Don’t worry, you will keep getting better until one day the hurt part won’t be a problem. If the trip was successful, there will be a bonus at the end.”

In Sally’s mind, she thought Jane was good for about 2 minutes before going to the cereal aisle. They walked directly to the tuna where Sally bought 2 cans. Next stop was cereal. Sally watched her phone for time. Jane was very anxious. In the last minute, not being able to decide between 3 different ones, Jane began pleading for all 3. Finally, she grabbed a box and threw it in the cart and asked to leave. As they walked out of the store, both were excited that this trip was successful. Jane quickly asked what the bonus was. Sally delightedly shared that they were going to get ice cream. Sally knew the work was not finished but for now she was happy Jane won her internal battle. In the future, Sally would have to extend the time in the store, change what Jane would have to choose from, and sometimes, go without rewards.

Going forward from where Sally was, she could easily set up training sessions by correcting the previous interaction. It might sound something like this:

“Jane, I was thinking about our trip to the store, when I was yelling, and the cans fell over. I have idea. I don’t want to do that again. I think we need to do practice sessions so we both get better at this. We could even have some fun practicing.”

Our goal as parents is to help our children mast new skills. Skills like emotional regulation, decision making, delayed rewards are all skills that need to be learned and strengthened. With traumatized children, we can all be through off track by developmental delays and NIWM. What kind of ideas do you have to help your traumatized children heal and grow?