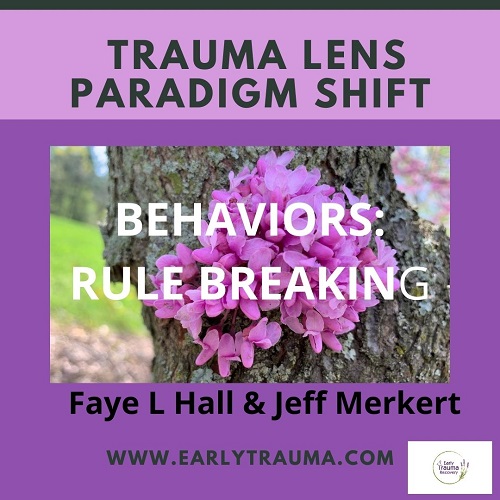 From the corner of her eye, Sally silently watched Jane, her daughter via foster care, sneak into the kitchen for her eighth snack. Sally yelled, again, at her to stop and go to her room. Jane wheeled about and stomped off, loudly screaming that she wanted to talk to her case worker because Sally was starving her. With a heavy sigh, Sally shook her head and wondered why Jane acted like this all the time.

Sally had taken all the preparation classes and attended the online trauma trainings. She knew Jane had a trauma history but this was ridiculous. Sally always gave Jane as much, even more food that she could eat. They had three meals a day and three snacks. Jane could eat as much fruit as she wanted. Sally was very specific in setting healthy house rules, why wasn’t Jane obeying? It was very scary for Sally to think that Jane could not learn from consequences. Sally was baffled that Jane was intentionally disobeying even with the consistent consequences. She teared as she wondered, not for the first time, “What am I missing?”

This pattern reoccurs frequently in foster and adoptive homes. Parents set rules and children disobey the rules. Most parents process these behaviors through their personal parenting models. “My parents would not allow me to do that.” “I would have been punished if I did that.” These mental models are created through our childhood experiences and within relationships with our caregivers. There is an assumption that these parenting models are viable across time and circumstances. Our suggestion is to explore the idea that even under that best of conditions, application of these models will not transfer accurately to the needs of children with early trauma.

This is where Sally struggled. She knew Jane had a trauma history but why should that change her parenting style? Wasn’t trauma something that Jane worked out in therapy? Sally’s question was similar to other foster and adoptive parents. She was not taught to see Jane’s behaviors through the trauma lens.

How do we determine correctness?

In this case, Sally’s assumption of Jane’s intentional rule breaking was inaccurate. Sometimes, we do things without thinking simply because it’s the correct thing to do but how do we determine correctness? This is where the trauma interpretation comes in. Jane’s brain was taught that off limit foods are to be sneaked. During Jane’s early years, her drug addicted father had a sweet tooth. Her mom kept a supply of Little Debbie Cakes for him. Occasionally, her mom would secretly eat one of the cakes and share it with Jane, contently narrating “We cannot tell dad because these are his.” Later when dad found the cake was missing, he yelled and threw things. In those moments, Jane’s enjoyment of the stolen snack outweighed his anger. She learned that angry caregivers were just part of getting off limit snacks. Completely worth it and not something to be avoided. Actually, Jane could not understand why Sally continued to get angry when she took snacks.

Jane suffered from competing shoulds: part of her just knew that when there was an off limit snack you should sneak it and part of her cognitively understood that she should not take the snack. Honestly, sometimes she was not even hungry and horded the food. She was sneaking the snack just because it seemed like the right thing to do and would endure the consequence because that was part of sneaking the snack. Sally wanted Jane to intentionally choose which part she listened to. Sally, without thinking, used her old parenting skills and assumed that Jane was intentionally rule breaking.

Sally determined she had to do something different and started looking for answers. She learned about “Competing Shoulds” that explained what was going on in Jane’s brain. Now she was able to see Jane’s behavior differently. When Sally understood why Jane took the snacks, she was able to explain Jane’s behavior to herself, Jane, and others. Sally wanted to help Jane heal so she set up some training exercises for Jane to get control of herself.

Sally called Jane into the living room. Jane entered quietly, her shoulders were stiff and she appeared defensive. Sally invited Jane to sit next to her. She began, “I think I know what has been going on. Part of you learned a long time ago that out of bounds snacks need to be sneaked. That means it feels right to you to try to sneak extra snacks but there is another part that knows you don’t need to. Without knowing what is going on, it is hard for you to choose which part to grow. I would like to help you with that choice.” Jane nodded she would work with Sally.

Sally took a Little Debbie cake out of her pocket and said “Learning to make choices is the goal, not just getting or not getting snacks. How about we set up a training exercise?” Sally offered. “If I set this cake on the kitchen counter, how long can you control that part of you that feels like you have to snatch it?” Sally said. Jane fussed, “I don’t know.” Sally questioned, “Half a day? I will keep one cake with me and one on the counter. Tonight, if the cake is on the counter. You can have both—the one I have and the one on the counter. If it is gone, I get the one in my pocket. One of these days, that hurt part won’t bug you anymore. You will be strong enough to choose which part to grow”

Jane had some success and some failures. The description of what was happening was simplistic, with many variables: hunger, tiredness, quality of the snack, etc but Jane and Sally were on the same page working toward the same goals. Through constant repetition with narration, Jane learned first to think about delayed gratification and, then, began building the skills in herself. Little Debbie’s stock prices rose as Sally and Jane had many practice sessions.