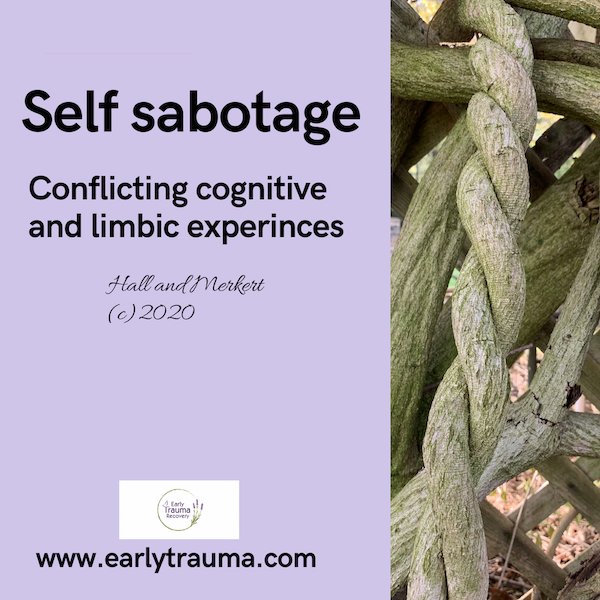 I smiled as I watched Allan, my 15 years old adopted son, sitting contentedly at the dining room table surrounded by art supplies. He was sketching a course where he could ride his BMX bike through the back woods. He talked excitedly about the steepness, he timidly pointed out the trees that needed to be removed, and places where stone would be required for ramps. His face brightened with the expectations… Suddenly, Allan arose from the table, grabbed the papers, and crushed them into a ball. He yelled that I would never allow this dream to come true and threw the papers at me. Before I knew it, he stormed out of the house. As I reached down to pick up the papers, I wondered “what brought that on?” Stunned, I knew I didn’t say or do anything to make him mad.

After I got over my shock, I decided to go back to my trauma training to interpret this behavior. Due to Allan’s early trauma, I know he has a Negative Internal Working Model (NIWM)-his belief system operates on I am bad (incompetent), caregivers are bad (cannot be trusted), and my world is unsafe. This belief system was formed and is stored in the limbic system—back brain. At the same time, he also has a thinking, cognitive, brain—front brain. The cognitive brain processes information, prompts creativity, and allows for evaluation. In the world that I am inviting Allan to live in, these two parts of his brain can be in direct opposition.

The dream to create a BMX course came from his cognitive brain which happily pondered the how’s and ways to see it come to fruition. The dream was fun! As he drew the course, his body began producing neurotransmitters both in anticipation of reality and the enjoyment of the dream. In the dream, he was happy, competent, and envied by his peers. His synapses were flooded with chemicals consistent with this picture. I could see his pleasure.

BATTLE OF THE LIMBIC AND COGNTIVE BRAIN

As his cognitive brain happily worked on the drawings, his limbic brain quietly increased his fear because his NIWM was inconsistent with this dream. Sadly, Allan was never aware of this build up of fear. However, when it eventually overpowered the pleasant feelings, his limbic brain had to create distance from the fear. What his front brain could imagine, his back brain could not tolerate. In a flash, he moved from the joy of creating to the fear of failure. With no way to make sense of this internal shift, Allan used his limbic brain belief that “caregivers are bad” to make sense of this experience. Thus, he destroyed the beginnings of his own dream.

People with a history of early trauma frequently have these experiences because of their NIWM. They “cognitively” know they are competent, are lovable, and are good people but the limbic NIWM tells them they can’t do it, their caregivers wouldn’t allow it, or there’s too many problems to solve. We all have that same thing happen when we begin to dream of something desirable. Our limbic filter is mixed between good and bad pictures-can we or cannot we not accomplish the task. The challenge is for us to tolerate the conflict between the parts of our brain by choosing which part we listen to and for how long. However, the traumatized brain lacks the knowledge (and recognition) of the fear and has almost no ability to “choose.” The person becomes polarized in one part or the other.

If they default to the fearful part of their self, it takes over to make that fear go away. This high-jacking stops cognitive function (creativity, rationality, knowing, thinking, etc.). Without the cognitive skills to manage fear, the strong emotions turn to anger. Anger provides the energy to protect from harm. Thus, they will use fight, flight, freeze, or fold to maintain safety. Allan used flight to take care of his emotions.

To parent a child who self-sabotages is very difficult. We see the positives but the children do not. We battle trying to reinforce the positives while they are in survival mode to prove the opposite. These battles are frequent, drains our energy, and interferes with the relationship with our children.

All is not lost, watch for more insight and interventions to help those who self-sabotage.